I was driving thru Espanola, New Mexico when I stopped for a cup of coffee at a local café. The waitress was friendly and seeing my backpack on the floor next to me, asked me where I was headed. “El Santuario in Chimayo” I replied while looking over my map. “Have you ever heard of Santa Rita Capilla?” she asked. I’m not an authority on pueblo churches but I did do enough background reading before my trip to know that I never heard of this place. I told the waitress that I never heard of Santa Rita and asked her where it is. “It’s on Route 64, high on a hill top, it’ll be on your left hand side” she said. I was curious, my mother was named after Saint Rita, the patron saint of the impossible, so I finished my coffee and went to look for this chapel. It didn’t take long to find it; it was just like the waitress said, high up on a hill on route 64, just one problem, to gain access I had to enter private property.
I stopped in front of the house that seemed to front the property and knocked on the door. An older woman, trim and gracious, answered the door. She was obliging and gave me her permission and a key to a gate that separated the flat ground behind her house and the start to a very high hill. The climb was quite an experience.
The skies were electric blue and a crystal breeze carried the cool scent of autumn and the smell of pinion pines and sage. As I trudged up the slope out of breath, I crossed my fingers and hoped for a clear view, with the chapel visible in the distance. I was lucky! Finally at the top, I took my time and allowed myself to rest long enough to shoot without my heart pounding. Red desert rock, golden cottonwoods and white-barked aspens were in the distance. As I contemplated the image on the ground glass, I was thinking about light, filtration, and development, at the same time I was also seeing line, form, and color. I chose to use medium format for my work - the larger image area and the requirement to use a tripod requires a pace that I feel make stronger and more interesting photographs.
After about an hour I felt that I was ready to take a look inside. A  front door of rotted wood let me into a tiny room guarded by statues of St. Rita and the Blessed Mother. Among the votive candles and rosaries there was some old newspapers, sitting on the small bench. I sat down and read them. What I was reading in these old yellowed newspapers is the story of how the chapel of Santa Rita came to be. Here is that story.
Shortly before World War 1, Pedro Fresquez was engaged to a woman in Chimayo. He had to leave her to serve in the infantry in Italy and during a deadly tank assault he took refuge in a chapel named Santa Rita. He prayed fervently to the patron Saint of the Impossible and promised if he survived he would construct a chapel in Her honor. He survived the war and true to his promise he built the chapel on the hilltop and was married to his fiancée shortly after. He and his family led a good long life protected by Santa Rita, the patron Saint of the Impossible. 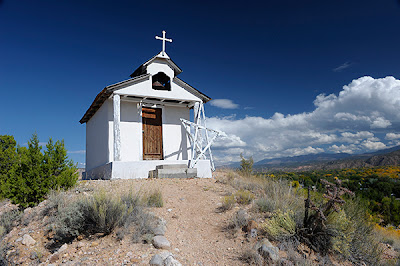 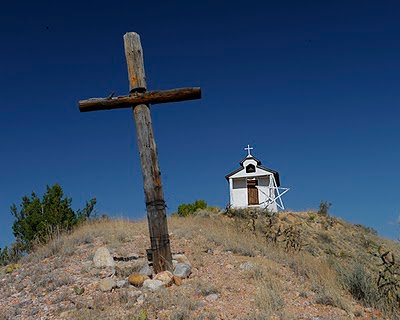 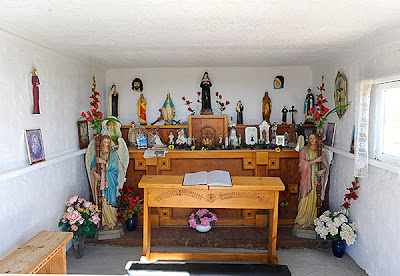 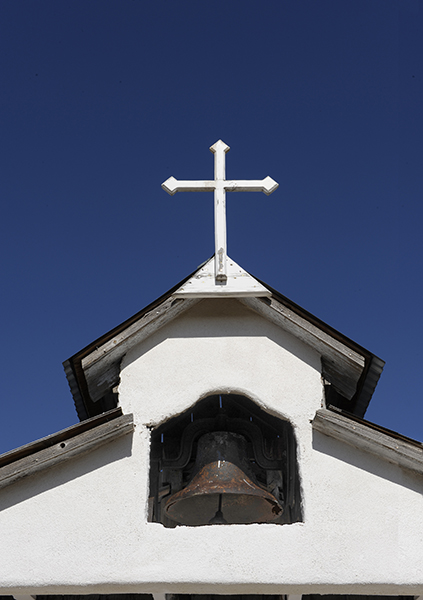 Posted by James Evangelista at 7:11 PM No comments: