In approaching the challenge of designing a Hall of Fame for NASCAR, Pei Cobb Freed & Partners sought to capture the essential spirit of NASCAR and its sport in architectural form. In exploring the possibilities for expressing speed and spectacle, they were drawn to the arena of action, the racecourse, where fans and race teams come together each race week for the spectacle of race day. Curving, sloped forms are evocative not only of the dynamic and changing shape of the racetrack but also of the perception of speed, which is at the heart of the NASCAR spectacle.

The NASCAR Hall of Fame in Charlotte, N.C., has earned national recognition in the  Innovative Design in Engineering and Architecture with Structural Steel awards program (IDEAS2). Conducted annually by AISC, the IDEAS2 awards recognize outstanding achievement in engineering and architecture on structural steel projects across the country.

My challenge on this assignment was how to handle the technical aspects of the light.  The interior space mixes halogen, tungsten, fluorescent, and natural light in a single area. Each registers a different color so I decided to shoot at dusk when the ambient light balances perfectly with the artificial lighting. 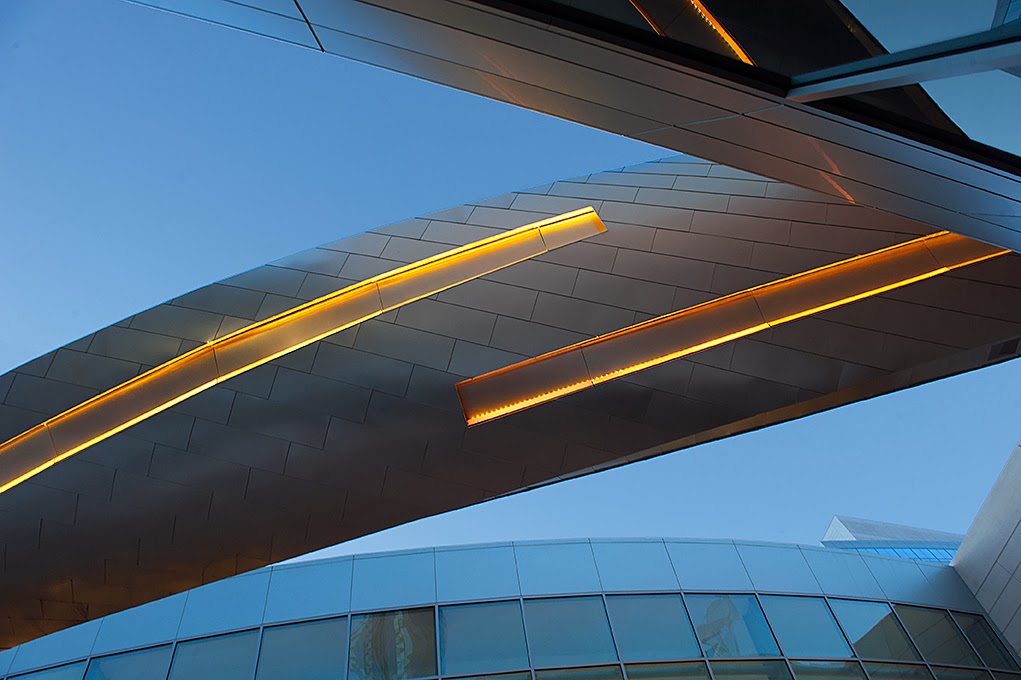 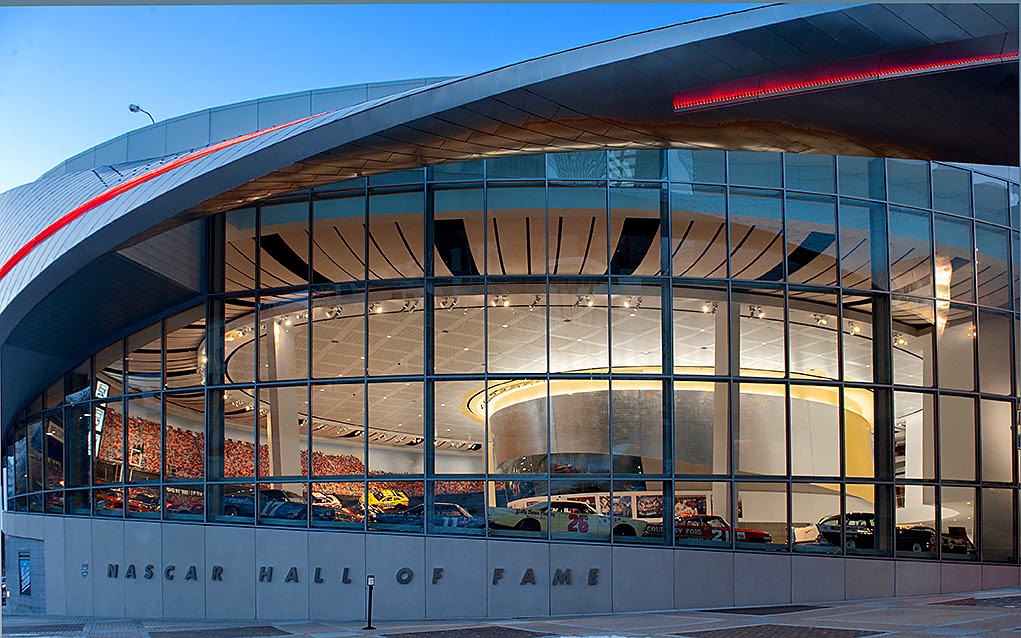 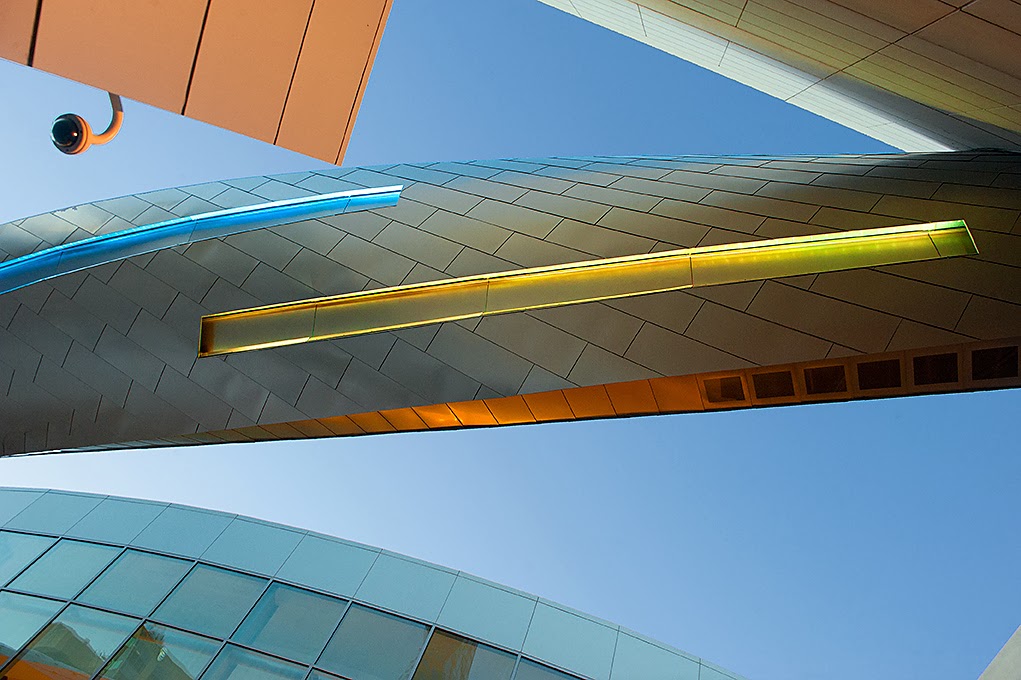 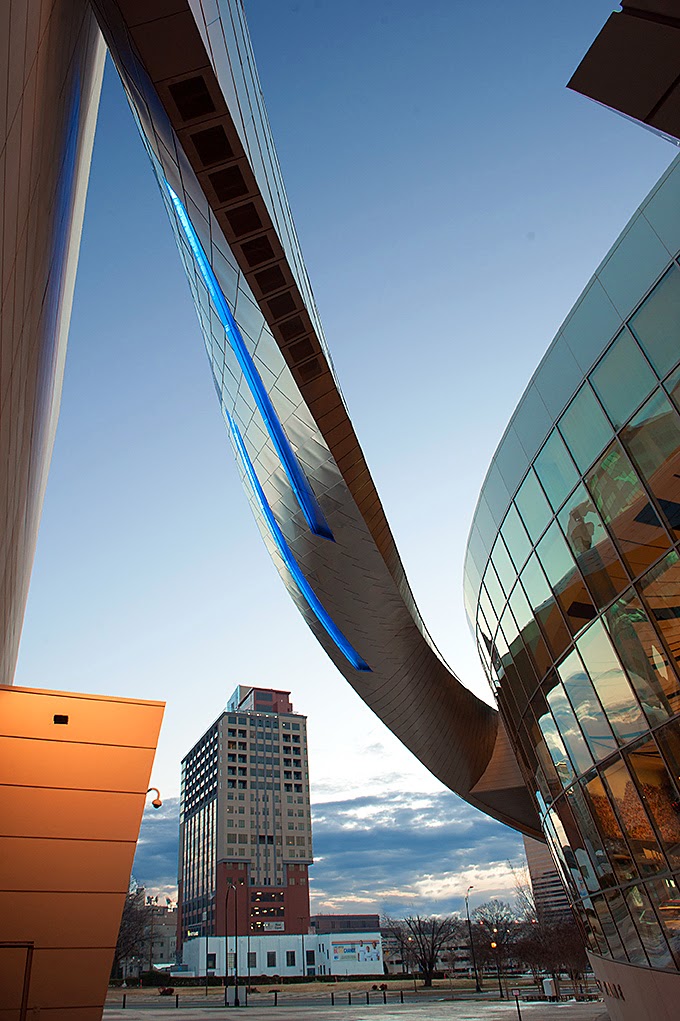 Posted by James Evangelista at 6:50 AM No comments: Links to this post

Like many location photographers I put thousands of miles on my vehicle each year while shooting on assignment. When I have the luxury of time I like to spend some time in the area I’m in when my shoot is over. For this blog I wanted to focus on an area a little closer to home, well actually, my home!

I have lived here in the rolling hills of southern Chester count since 2003, specifically in Oxford, PA. Originally a quaint and quiet little country town, the past few years have brought the inevitable development and sprawl that results when too many people, like myself, are looking for a country lifestyle.

I like to tell people who ask me where I’m from originally how in South Philly I was used to waking up to the sounds of car horns, ghetto blasters, car alarms and yes, gunfire.  Now I wake up to an alarm clock because it’s so quiet around here I’d oversleep otherwise.

Oxford had its earliest beginnings at a crossroads in 1754 when John Hayes built a two-story log cabin at the site of the current Oxford Hotel. Hood’s, as Oxford was first known, remained a meeting place and stopover for travelers as stagecoaches from Philadelphia and Baltimore traveled through three times a week and used the town as a rest stop.  Oxford Feed & Lumber,  is the oldest Oxford business still in existence. It sits along the tracks of the old Philadelphia-Baltimore Central Railroad behind Fourth and Market Streets. 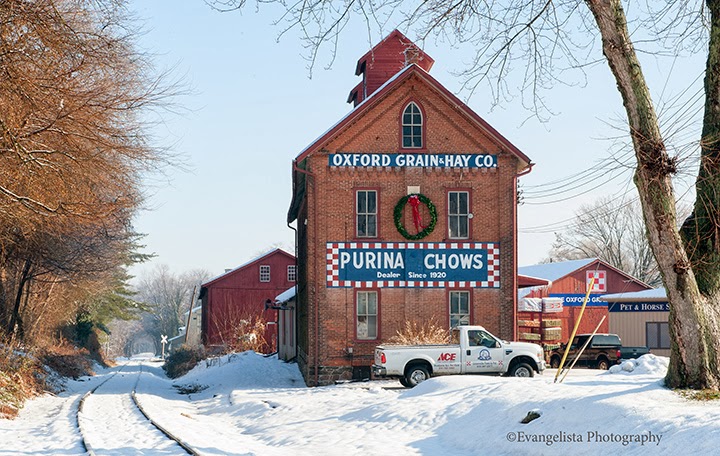 The Oxford area is an area of rich farmland and there is a definite Amish presence, which adds to the charm of this community. Oxford’s diverse landscape and open space is still being farmed in the traditional fashion – the family farm still accounts for a large part of the local economy. Today, beltways of farmland and agricultural preservation are balanced with new housing developments. 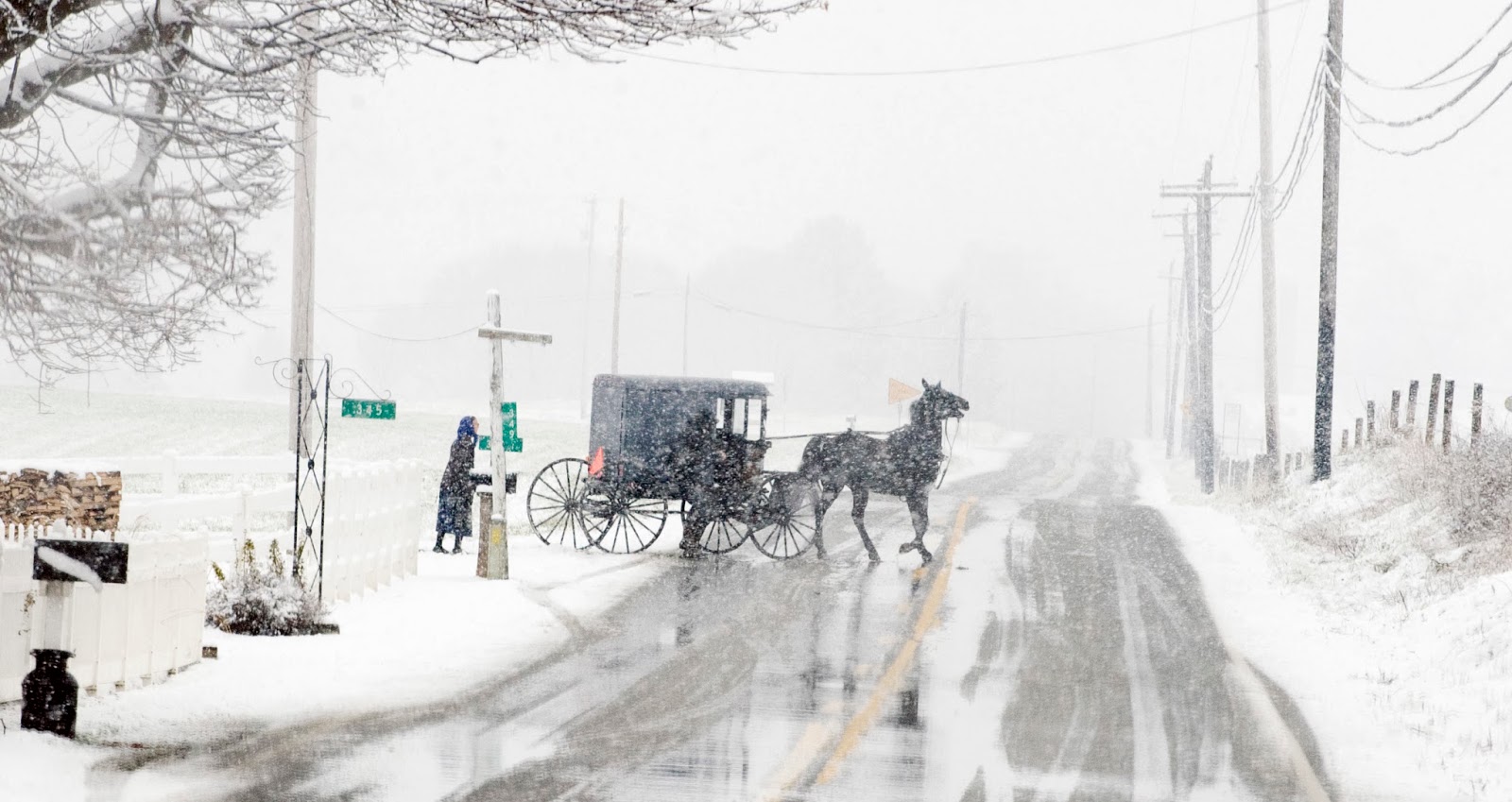 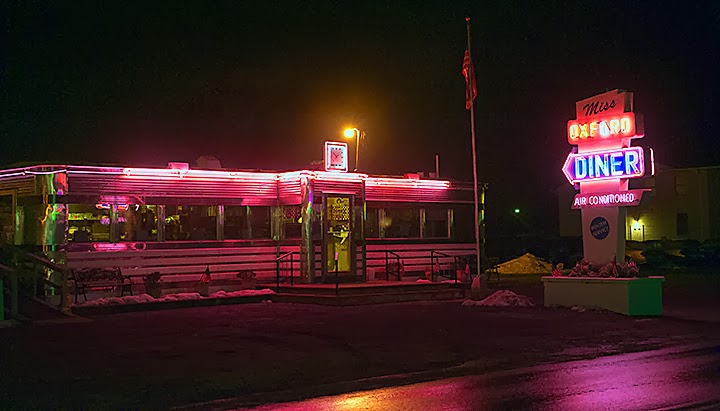 Opened in 1954, The Miss Oxford Diner still maintains the original design inside and out, although they now have free wi-fi.

Coming in on a hush, a snowstorm sweeps across the area giving a new sense of tranquility. 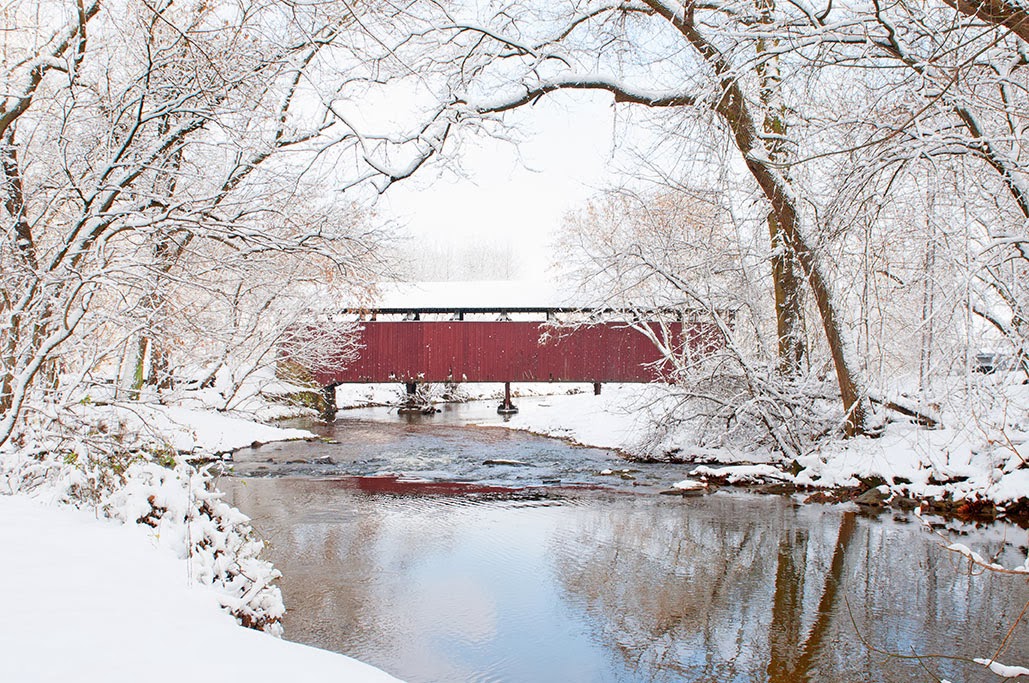 Nestled amid the natural scenery of the area, this covered bridge offers an escape from the modern world.

I still miss walking to friends' houses in South Philly as well as the restaurants and stores that were on every corner, but life, they say, is a compromise and now, ten years later, I think I made the right choice!
Posted by James Evangelista at 10:01 AM No comments: Links to this post