Faith and devotion in the Landscape

The four Pueblo mission churches of San Jose de Laguna, San Ysidro, St. Geronimo, and San Lorenzo de Picuris are prime examples of defining cultural identity. With notable exceptions, much recent architecture has ceased to symbolize permanence, sacredness and collective identity (Jackson 1994), yet these characteristics are embedded in New Mexico’s Pueblo mission churches. Today it would be difficult to imagine the Land of Enchantment without these mission churches or the faithful people who fill their pews.


Pueblo people believe that their link with the land, the root of their existence, is facilitated by the churches. This church hosts the cross of the Laguna religion, which represents the four directions of Creator and Holy Spirit. The church and the material with which it was constructed, is a connection between the Pueblo Indians and their origins: the land. 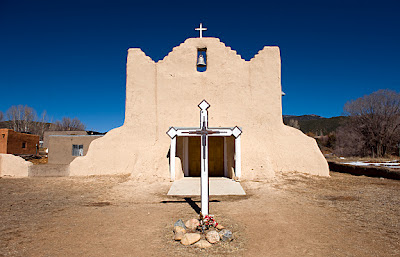 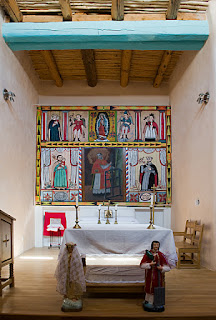 PicurÌs Pueblo is located in a hidden valley of the Sangre de Cristo Mountains and the village has been continuously occupied since circa 750 AD. The ancestors of today’s inhabitants named this place Pinguilthaî which means “mountain warrior place.” 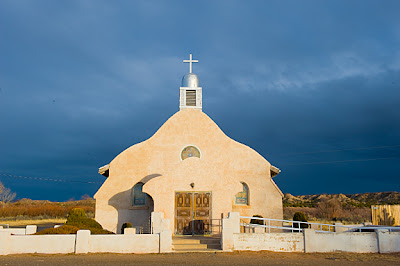 This church was constructed in 1868 and dedicated to San Ysidro, patron of farmers, the church incorporates materials salvaged from the original structure. The building is one of the finest surviving examples of mid-19th century New Mexico religious architecture. It is maintained by the Corrales Historical Society and used for community functions and other cultural events. 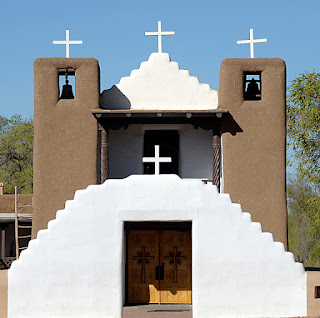 For over 1,000 years the Tiwa Pueblo people have called this land home. Surrounded by the pine-lined Sangre de Cristo mountains, the 95,000-acre Taos Pueblo is said to be the oldest continuously inhabited community in the United States. Named for the Taos Pueblo patron saint, St. Jerome's Chapel is one of the outstanding National Historic Landmarks in the plaza.

If you go - There are personal dwellings and/or important historic sites at pueblos that must be respected as such. Don't climb on the buildings or peek into doors or windows. Don't enter sacred grounds, such as cemeteries and kivas. If you attend a dance or ceremony, remain silent while it is taking place and refrain from applause when it's over. Many pueblos prohibit photography or sketches; others require you to pay a fee for a permit. If you don't respect the privacy of the Native Americans who live at the pueblo, you'll be asked to leave.