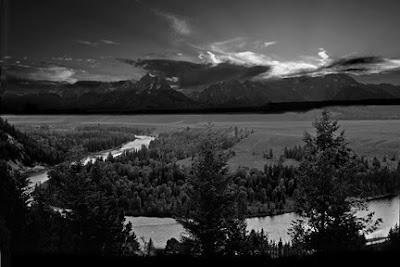 The Eagle is a messenger to the Creator. When the earth was created, a great thundercloud appeared on the horizon. Flashing lightning and thundering it's call, it descended toward the treetops. As the mists cleared, there was an eagle perched on the highest tree on the mountain. He took flight and flew slowly down to the ground. As he approached the earth, he put forward his foot, and as he stepped upon the ground, he became a man.

In January of 2000 my thoughts were what better way to ring in the new century than to spend a couple of weeks in the Grand Tetons. I needed to feel the grandeur and breathe the atmosphere of this special place and I can still remember the anxious excitement and expectant anticipation I felt as I went hiking up to get the right perspective on the Snake River overlook. The higher I went up the trail the more stunning the view became and the sweeter the air smelled. Once I was in position I wanted to enjoy taking my time while setting up my tripod and camera, but while I was taking my meter readings I noticed the cloud passing over the mountain range. No time to think, hardly time to meter, this photograph was composed in seconds and I got five shots off before the cloud dissipated leaving me in wonder and awe. For a few timeless seconds I like to think I witnessed something inspired by a higher power.

Posted by James Evangelista at 9:09 AM No comments: