Lighthouses are symbols of national achievement, dependability under duress and hope. Some find personal meaning, with the beacon serving as a metaphor of guidance in their own spiritual quest. These differing perspectives of lighthouses all inspire an affinity for the special places created at the meeting point of water and earth. The timeless relationship and the interactive dynamics between sea, earth and sky, touching and caressing the lighthouse at every moment of the day, inspired me to create the images in this collection.

You have to visit the Maine coast in the summer in order to experience the smell of fresh air. Near the ocean with each crashing wave, the fresh air is filled with scents that are at full peak in summer. In the woods, the fresh air is filled with pine scent and moss. Each is unique and has a calming influence over the senses, and if you are at rest they will put you right to sleep.

I arrived at Cape Neddick before dawn. The water around the Light is very hypnotic. Normally, the current of the 100-yard waterway between the island and mainland has a strong, back-and-forth rocking motion, but a fast moving storm the night before had the waves crashing against the rocky shoreline harder than it usually does. I set up my camera and tripod in the dark and decided not to wait for first light to portray the relief sailors must have felt when they saw the beacon lighting the dangerous rocks in story waters.

This is a late afternoon shot with the face of Pemaquid Light in full sun and the sloping, layered granite rocks in the foreground. The granite rocks are layered and almost take an a petrified wood appearance. I wanted to show the sheerness and height of the cliffs, and of course, catch the reflection of the light house in the puddle, so I perched myself precariously close to the edge to capture this photograph.

Marshall Point is located on the very tip of St. Georges Peninsula, Maine. This brick and granite lighthouse was built in 1857 and is still an active Coast Guard aid to navigation. Remember the scene in the movie Forrest Gump when Tom Hanks ended his cross-country run at a lighthouse? Thats this lighthouse.

Hereford Inlet Lighthouse, built in 1874, was the first building on an uninhabited sandbar. Shipwrecks of whalers and merchant ships around the sandbar compelled Congress to fund a lighthouse. With a white light now signaling safe passage from ocean to inlet, a fishing village was built around the lighthouse. It was first known as Anglesea, home to boat builders and other maritime craftsmen. Over time, the main industry of the sandbar changed from sea to seaside and the lighthouse tower was topped by oceanfront hotels and condos, and dwarfed by rollercoasters and water slides.

Although several lighthouses have stood along the edge of the Delaware Bay, East Point is the last one remaining on the Jersey side. The lantern room offers a panoramic view of the surrounding land and water and is a favorite subject of artists. In the spring, you can observe the annual migration of thousands of shore birds, especially in late May when the horseshoe crabs come ashore to lay eggs.

This distinctive lighthouses is on a stretch of the Outer Banks that has witnessed everything from hurricanes to malaria, from pirates to Nazi U-boats. NATIONAL GEOGRAGPHIC staff member Dorothy Nicholson plotted more than 500 Shipwrecks all along the Outer Banks and many happened along the waters of the Bodie Island Lighthouse. As of this writing A massive restoration project is underway for the Bodie Island Lighthouse. The National Park Service discovered significant problems with the support structures under the balcony and The National Park Service is looking for money to help fix the problem.

I hear from people all the time about the lighthouses they love and why. It seems everybody has a lighthouse story.

And, likewise, every lighthouse has a story.

Posted by James Evangelista at 12:56 PM No comments: 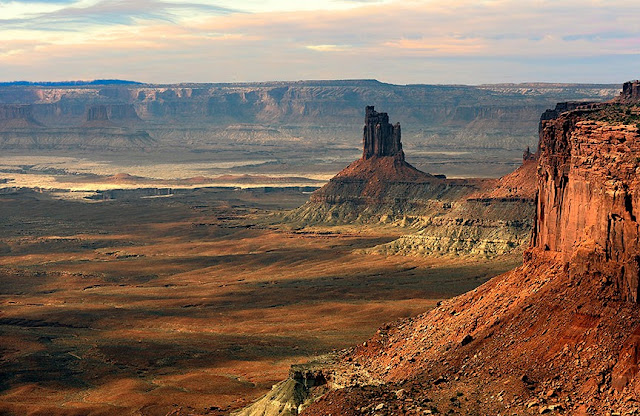 I had camped overnight in Horse Thief Canyon in the Island in the Sky district of the Canyonlands in Utah. I heard a raven call from a nearby grove of cottonwood trees, his insistent "crock, crock" echoing off the red sandstone walls. The sun had just risen above the canyon walls, its first light painting the canyon’s sculpted sandstone formations. I pushed the plunger on my cable release and my Hasselblad recorded the moment.

We all find our own form of therapy, photography happens to be mine. There’s something about hiking to your destination and setting up the camera and tripod and waiting for that first light that continues to excite me. It was from this form of “therapy” that I’ve managed to integrate my creative life into my entire life and at this point my photography grows as I grow, whether it's me hiking down a canyon, walking on the beach, writing a blog or shooting in my studio.

I think it's safe to say that too many artists get caught up in the idea of being "creative". The idea that we have to "do" something to access our creativity, or we have to "be" something or "try" to be creative. In my experience however, true creativity is more of a result of "undoing" rather than doing.

We're usually generating so much of our own thoughts, concerns, expectations, desires and judgments that there's literally NO room for divine inspiration. True creativity only comes when a space is created. However, emptying ourselves of all that "extra" stuff that we usually think IS "us", is often challenging and sometimes confronting. Like every other worthwhile pursuit, creating this space takes practice.

In his first book, The Teachings of Don Juan, by Carlos Castaneda, Castaneda and Don Juan have a perfectly wonderful dialog together on the business of ‘not doing’ as opposed to ‘doing.’ Don Juan tells Castaneda that he must learn to ‘not do.’ Castaneda says, how do I not do? Life is doing. Yes, that’s precisely the problem. Everything that you do is based on something you already know. It has already been handed to you. Everybody is doing according to a formula and that’s what keeps it all in place. This is all too obvious. Not doing means that you’re aware that that process exists and you step away from it in order to see clearly. The ability to be free, from that process, even though you are a part of it, enables you to ‘see.’ Then it’s not difficult at all. Then the essence becomes available!
Posted by James Evangelista at 11:52 AM No comments: