Death Valley: Beyond the Imagination.

“The spirit of Timbisha has received many travelers from other lands, and all of Mother Earth’s belongings; the home of the Timbisha Shoshone Newe (Peoples), has been used as a commodity of sorts. Timbisha is not a “valley of death” – it is the valley of the Red Ochre. Red Ochre is used spiritually by the Newe with its Healing Power. Not of death but for life. Waters from the mountains to the east and west flow underground into this valley. Overflows of nearby springs once formed streams of surface water by its own course, bringing life.”
- Pauline Esteves, Tribal Elder

The Timbisha Shoshone Indians were devasted to learn that pioneers misunderstood their homeland enough to name it "Death Valley." To the people who lived in the area for more than a millennium, the valley's resources offered everything necessary for comfort and contentment. Traditional brush homes made perfect desert dwellings, allowing breezes to filter in through the arrowweed walls. Men hunted jackrabbits and bighorn sheep, using arrows tipped with stone points. Women wove baskets so intricately coiled they could hold water. These were sometimes decorated with patterns of interlocking shapes or a delicate geometry of lizards and butterflies.

The Timbisha's oral history relates that they have lived in the area since time immemorial -- and, many visitors are surprised to learn, still live in the heart of Death Valley today. To fully understand the valley in all its vast dimensions, it is essential to be aware of of this deep connection between the natural landscape and Timbisha Shoshone culture.

A kinship with the ancients is strongly felt in a landscape that looks much as it did when they inhabited it. Dreams take shape here. Deserts do that. Chimeras. Mirages. Thoughts that begin to form patterns rather than bouncing back at you. Tricks of light that make the veil between form and illusion thin to the point of disappearing. Looking up at the stars, I felt wonderfully small.


This land is not a subtle place; the effects of the forces of nature are glaringly obvious in the tortured landscape, where rocks have been lifted and eroded, twisted and metamorphosed, then left naked. And yet, in the midst of this climate of extremes (and despite decades of full-scale mining operations in the area), birds and rodents and reptiles and insects live together in intricate, delicately balanced communities. Death Valley even boasts its own species of fish and snail. Over the next few days I explored the mountains, canyons and flats of the park, reveling in the silence, the solitude and the vistas. It could take an eternity to learn all it’s secrets. 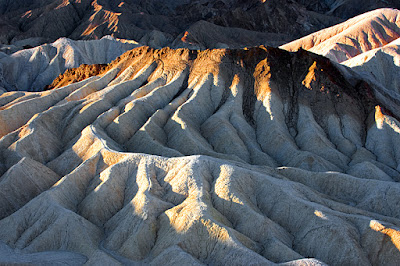 It's said that the West was built on legends. And that legends are a way of understanding things greater than ourselves. Forces that shape our lives, events that defy explanation.

The valley of the Red Ochre is such a place.

Posted by James Evangelista at 9:50 AM No comments: