Art in the Desert

On the way to Death Valley we decided to stop at Beatty, Nevada to stock up on some provisions and just to check out the town. At a campground on the outskirts of town I said hello to this man sitting outside of his travel trailer, enjoying a cup of coffee.  How ya doing? he asked while leaning back in his lawn chair. “I'm doing well thanks, yourself?” I asked. Don't worry about the dog he said, seeing I was eyeing his approaching dog. I make it a point not to pet strange dogs and this one was no exception. Looking like a cross between a mut and another mut, he looked like a bad attitude. I asked the man a question about the road to Death Valley, he extended a hand and said "I'm Tiny", I shook his hand, it was like putting my hand in a hydraulic press, "Jim", I said. “Coffee Jim”? “Sure” I said. Over a cup of good strong coffee he told me "You might want to stop at Rhyolite along the way, it's only about a half hour from here, and it's a pretty interesting place for being in the middle of nowhere". Tiny seemed to be an interesting guy, he looked intimidating as hell but I got the sense his looks belied his personality. Thanks for the java I said, can I take your photograph before I go"? "I suppose" is all he said. 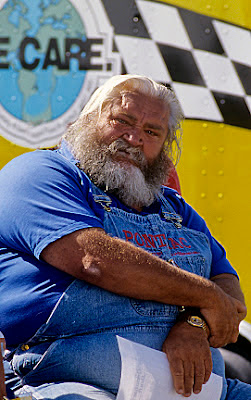 I took Tiny’s suggestion and now we’re in Rhyolite, Nevada, a ghost town off the main road and I’m staring at sculptures that somehow remind me of Cadillac Ranch in it’s eclecticness. A group of prominent Belgian artists, led by the late Albert Szukalski, created a self-described art situation consisting of seven outdoor sculptures that are colossal not only in their scale, but in their placement within the vast upper Mojave desert.

Belgian sculptor Charles Albert Szukalski created “The Last Supper” in 1984; the eerie white shrouded figures almost glow supernaturally against the dark mountains. Szukalski was later joined by European artists who wanted to create site-specific works in the desert. Szukalski and his fellow Europeans loved the backdrop of Rhyolite and the Amargosa Valley, finding it a perfect setting for evocative, large-scale sculptures. Szukalski later added two more sculptures: “Ghost Rider” (a shrouded plaster ghost contemplating a bicycle) and “Desert Flower” (an explosive assemblage of found metals and car parts that blooms upward like a yucca plant). It took the interest and dedication of two artists, Charles Morgan and Suzanne Hackett-Morgan, to transform an aesthetic oddity into The Goldwell Museum. Both had loved the site since the mid-’90s, when they curated a show at the Contemporary Arts Collective Gallery and set up a website devoted to it; when Szukalski died in 2000, his partner donated the site to the nonprofit organization the Morgans created to preserve it.

Beyond preservation, they sought to establish a studio and residency program for artists to work in and be inspired by the Amargosa desert in the same way it inspired Szukalski. The two created the Red Barn Art Center, a facility for artist residencies, workshops and exhibitions. Starting in 2007, Goldwell hosted its first three residencies. The following year, it hosted nine artists in multiple disciplines from around the country. In addition, Goldwell sponsored workshops and art/design symposia featuring prominent national and regional talent. The first was the “Gathering of Desert Photographers,” a three-day event, bringing together photographers, curators and writers with an interest in the desert as an art space.
What distinguishes the Goldwell Museum from the merely out-of-the-way art oddities that dot the West is its dedication to an ongoing dialogue between artists and the landscape. More than merely preserving Szukalski’s vision, Goldwell extends it, giving artists from across the spectrum the chance to experience the Nevada landscape and incorporate it into their own art, turning the seed of Szukalski’s “Last Supper” into an everlasting feast of artistic possibility.