Zion National Park, in southwest Utah, preserves the most fairytale landscape in the American Southwest, and offers some of the best day hikes to be found anywhere in the region.

The park is divided into two sections: a large square containing Zion Canyon and its offshoots along the Virgin River basin and a smaller rectangle at the northwest corner made up of the finger canyons of the Kolob.

The palette throughout the park is striking, with umber, vermillion and burnt sienna laid across cliff faces in striated competition. The tops of some buttes stand out chalk white where hematite - the iron oxide that acts as the glue in Navajo sandstone - has leeched out with the rains. But one of the unusual features of the North Fork is that here alone, and only well up the crevice, the rockface and sand turn coral pink, a disorienting allusion to a Caribbean beach.

The views are stunning on day hikes: Take the short but steep Weeping Rock or the easier Riverside Walk, where hanging gardens of wildflowers drape sandstone walls in spring and summer. Much more challenging -- and not for the vertiginous -- is Angels Landing, which snakes along a narrow ridge with a drop-off of 1,500 feet, ending at a summit high above Zion Canyon. 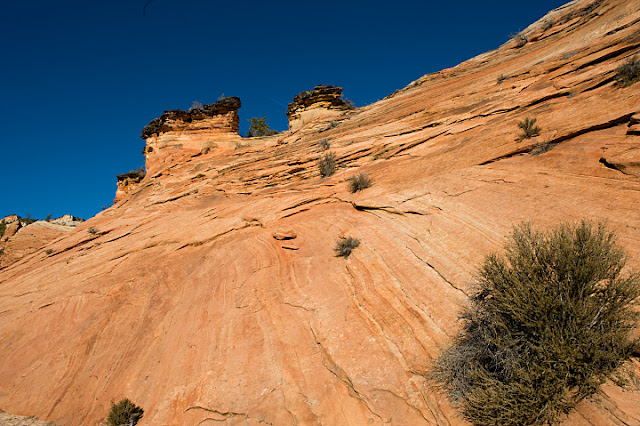 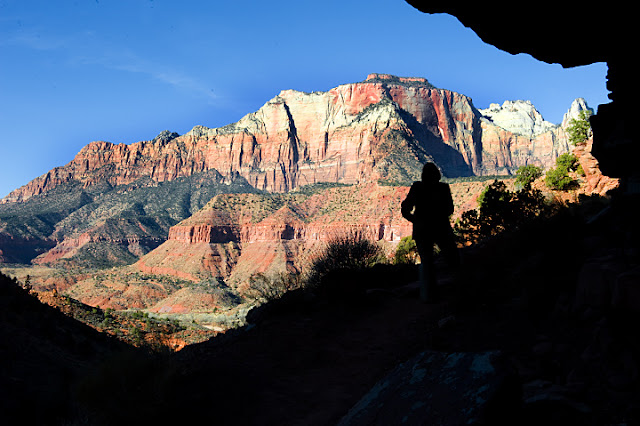 The Watchman Trail is a short trail (3-miles round trip) that leads to a viewpoint on top of the first layer of cliffs roughly 300 feet above. This trail doesn't actually take you to the top of the Watchman Mountain, but from the viewpoint you can get a good view of the peak to the south. 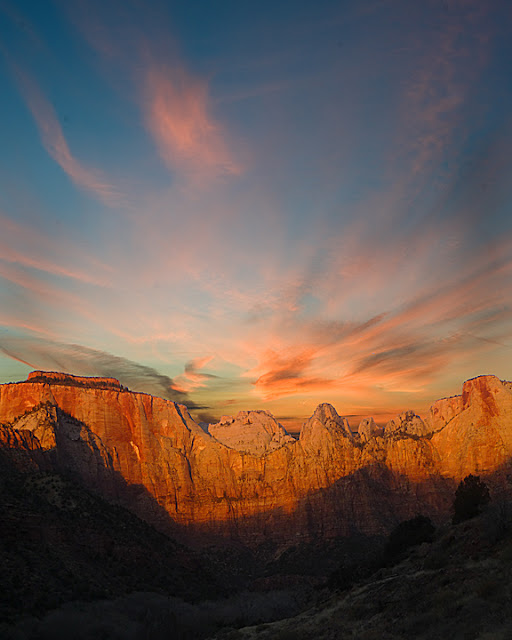 The first rays of the new rising sun and autumn storm clouds conspire to create a scene of pure peace and beauty along the the Towers of the Virgin in Zion National Park. The leftmost formation is the West Temple, the highest point in Zion. On the far right lies the Altar of Sacrifice, known as such for the blood-like red iron stains near its top which contrast to the white Navajo sandstone.

The carefully chosen gift of art is always understood to be a treasured gift that expresses personal taste as well as the relationship it honors. These signed, limited edition photographs are available for your holiday gift needs. Simply contact me at jaeimages@gmail.com to order.