There is something about a Death Valley sunrise that awakens you to a bigger possibility!

Centuries ago the Timbisha Shoshone Indians hunted here and followed seasonal migrations for harvesting of pinyon pine nuts and mesquite beans with their families. Pleasant to think that the Shoshone could kick back after a hard day of hunting and have some quiet time here. Rock art and artifacts indicate a human presence dating back at least 9,000 years.
As night falls, Death Valley's elusive populations of bobcats, kit foxes, and rodents venture out. Far above on steep mountain slopes, desert bighorn sheep forage among Joshua trees, scrubby junipers, and pines, while hawks soar on thermals rising into vivid blue, cloudless skies.
I was here an hour before sunrise and took my first shot during the civil dawn. The first images showed real promise. Exposures were long, as much as 3 minutes. Because it was so early, the light from the sky was an incredibly rich, predawn blue with flashes of a glowing yellow-orange. The dawn was coming, and the light was getting brighter every moment.  By the time I took this picture the exposure was down to one minute.

Some technical notes from the field; Nikon D700 on a Gitzo carbon fiber tripod with an Arca Swiss ball head and a Really Right Stuff-L-plate so that I could center the Nikkor 35mm lens over the nodal point.  This image was to be a multi-frame panorama.
If you were able to follow all the preceding details, then you already know what I am talking about. If not, it hardly matters.
What does matter though is rather than trying further to explain what is best seen, I suggest relishing the magnificence of Death Valley yourself and if you get a chance, go hike in the pre dawn light to Zabriskie Point! 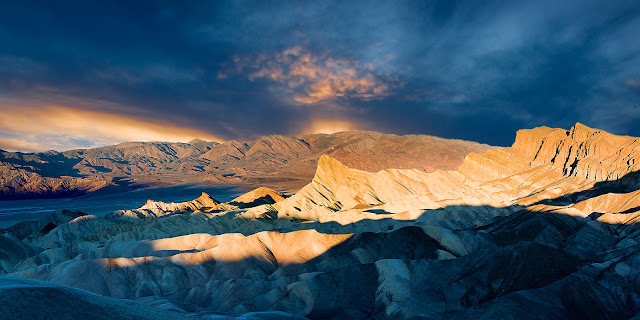