Geometry of the Spirit 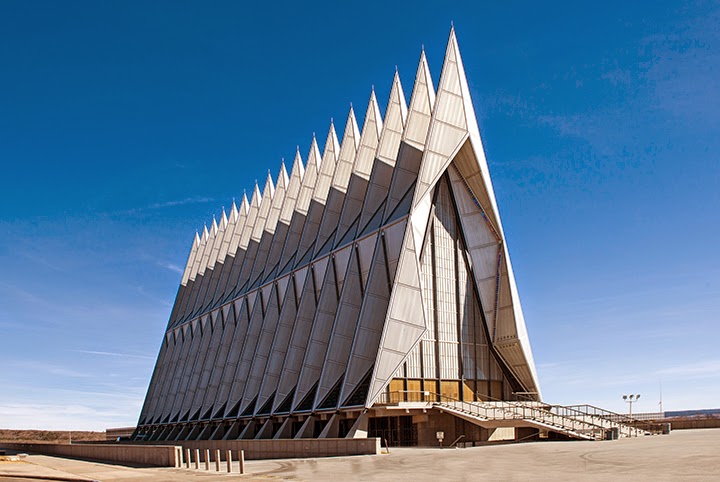 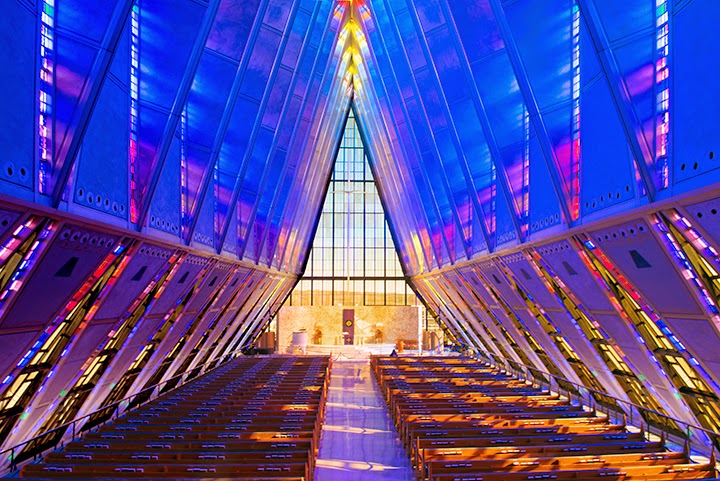 The United States Air Force Cadet Chapel soars above the horizontal and vertical lines of the other buildings on the 17,500-acre USAF site and has received the American Institute of Architects' 25 Year Award. The AIA citation reads: Artistically ahead of its time, the Cadet Chapel continues and will continue to inspire worship and awe.

As I approached the academy, the chapel's soaring form and complex geometry rise like the towers of gothic cathedrals, but also suggests fighter planes in steep ascent.

At 150 feet high, the Cadet Chapel articulates the USAF motto "Above All" by towering above all the other buildings -- aesthetically and altitudinally -- on the east side of the Rampart Range of the Rocky Mountains north of Colorado Springs, 7,258 feet above sea-level.

Modeled on the Basilica of San Francesco d'Assisi in Italy, the Cadet Chapel honors its foreign tradition as well as its flying mission. The cathedral ceiling cascades in a collision of colorful jet-streams (red for flame, blue for sky). The American walnut and African mahogany pews, with their ends carved to recall World War I plane propellers and their backs capped by aluminum strips resembling a fighter aircraft wing's trailing edge, march reverently toward the Italian pietra santa marble chancel inlaid with semi-precious Colorado stones. The USAFA Cadet Chapel is an icon of modernism, a memorable icon of religious architecture ahead of its time, and it is now a United States National Historic Landmark.